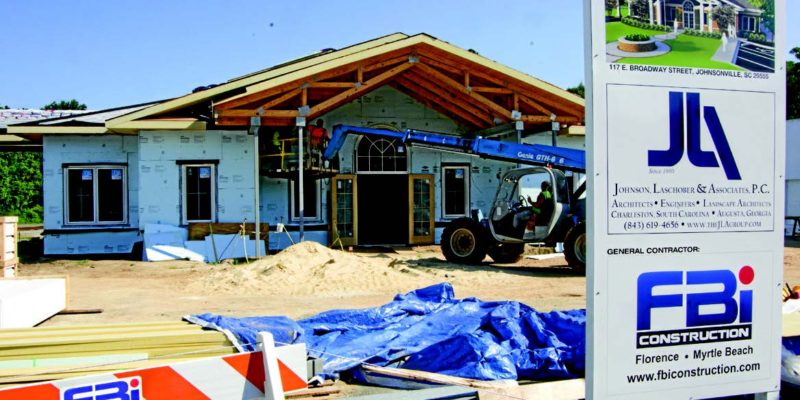 JOHNSONVILLE — Below budget and ahead of schedule — that’s how Johnsonville Mayor Johnny Hanna describes the city’s new city hall that is now taking shape on what was the parking lot of a grocery.

“This was the old IGA parking lot. We purchased the property with the vision of doing exactly what we’re doing,” Hanna said during a quick tour through the building — framework done inside and roof ready to go on. “We’re just trying to improve it, move forward, modernize. As it’s taking shape I feel like the citizens are taking ownership and some pride in it.”

When completed this will be the first purpose-built municipal building the city has had, said David Mace, downtown development manager.

Other buildings have just been “taken over and renovated” by the city.

“There was a lot of meetings, a lot of planning, a lot of overlooking plans,” Hanna said.

“We got a little big to start with and sized it down, tried to do it as economically possible and still keep it possible,” Hanna said.

The building includes a wish list of needs and will double as a community building.

“Everything was well thought out,” Hanna said.

Once completed the building will have a cluster of small offices for city leaders, an area for the city clerk along with a water and sewer office and drive-thru payment window and some currently unused space into which the city can grow.

It will also have an emergency operations center and a council chamber capable of seating 120 people.

“Before you had fire, city and police operating from three different sites,”Hanna said. “Now can put three in one building without chance of losing power.”

The new council chamber will have video display panels and cameras for Zoom-style meetings and can be closed off from the building’s offices to allow it to serve as a community room, Hanna said.

“Hopefully we can fill those seats with concerned citizens and move it forward as a city,”Hanna said.“ Have more people involved than just a few.”

As the city moves forward with construction, Hanna said, the fate of the current city hall remains up in the air.

He said several options were being discussed.